We wanted to see Puffins, the cute black and white seabirds which dive for their food supply and have a parrot color bill (therefore called “Papageientaucher” in German). You can find them on every postcard in an Islandic Souvenir Shop in Reykjavik. The question was, if it is possible to find them very close by on land (i.e. avoiding a shaky boat ride and a 500mm lens). Guidebooks recommended boat tours but why not just asking the locals?

In Höfn we found a very nice woman who told us, that in the northern part of the East Fjords, there is a “small town” called Bakkagerdi and in season there is a huge puffin colony for breeding close by. Season was on, so why not heading to the “small town” to check this out?

The route to that “small town” was via a pass with snow and ice. All felt a bit remote and extinct, but with some entertainment from time. For example a group of sheep using the street for a race, a fantastic view at the pass and insight that the expression “small town” is an exaggeration. Bakkagerdi has 300 (human) inhabitants, a church, a small kiosk and a camping ground. That’s basically it, but what’s most important for us: the sun was shining and the landscape was amazing *smiley cool* ! 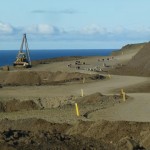 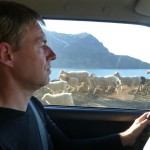 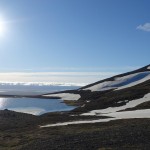 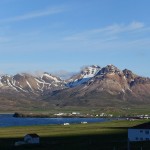 Internet research leaded to the opinion that it is best to check out the puffin colony either in the evening or in the morning. At the end of the road there is a little harbor with a cliff which is the home of the little fellows. So we hoped being lucky to find a few and went there. Well, we were lucky… not a few… A megacity with 20.000+ puffins!!

For breeding they need to go on land, dig little holes where they lay their eggs and later bring little fish to their chicks. And this is what they did: delivering child food. Not just one or two fish, but a dozen – carefully stringed together in their mouths. Super cute. And also they were not shy at all – we could silently sit there and watch *smiley smiling* . No binocular needed really… *smiley like* 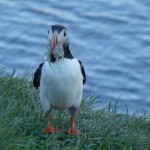 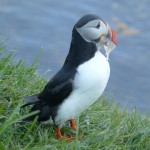 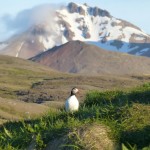 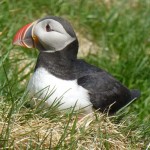 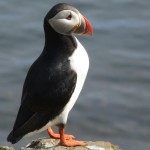 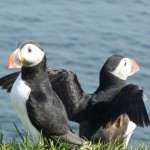 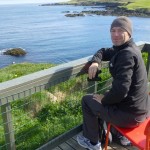 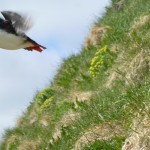 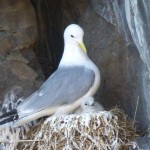 The question rose – how do the puffins line up the fish when catching new without losing the old ones…? Guess how? Actually quite simple, they put the tongue underneath the fish and press it against the upper part of the bill – and are then ready to pick the next fish. Smart *smiley cool*

We really liked the area, the campsite was nice with good facilities and the sun was shining… this is how life should always be… in the kitchen hut (with a big window facing the church for a view), we met another traveler from Spain. He came with his motorbike all the way via France, Benelux, Germany, and Denmark – where he took the ferry and it was his first night in Island (the sleeping bag was already not warm enough in France….). So time to practice Spanish and share a few tips. After a while of talking we wondered why the light was on the other side of the church…?? We all remembered the sun shining on the church, not from the back… A glance on the watch explained all… the sun already changed direction…. it was half past one *smiley surprised* !! Time to go to bed! 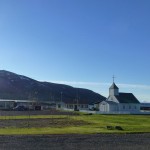 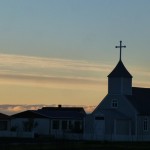 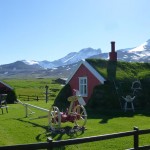 The next day we did a nice hike to the next bay. The path leaded us over the hill with snow – what kind of a summer vacation did we pick this year *smiley worried* ?? But again, the sunny landscape was beautiful *smiley cool* and very lonely, except for some sheep. After 5 hours of rather fast walking we returned to the tent – and up for a good portion of pasta! 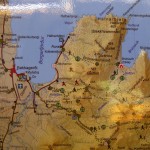 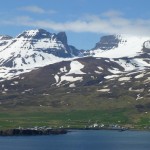 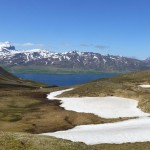 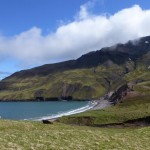 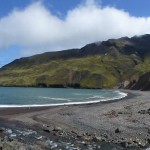 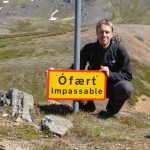 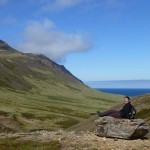