Well, we thought, Bora Bora might be hard to beat… but in a way I liked Huahine even better. Of course, the scenery is more spectacular on Bora Bora (if there are no clouds to see both peaks…*smiley winking*, but Huahine is much less touristy (means also you have to speak French!), people are extremely friendly and give the visitors a really warm welcome and the whole island is like a tropical garden.

We stayed in a bed and breakfast of a French family. We had the whole guest house for us alone – it was situated in a beautiful garden, with two huge but friendly dogs… the family stayed in the house next to it, but came over from time to time to have a chat. Yes, in French. Tough time but great to rehearse for me. And other than very often in France: extremely patient when it took a while to explain what I wanted to say and happy that I made the effort to speak French (yes, they do speak 3-4 words of English…*smiley winking*. I think, if I need to polish my French skills one day, I will do it either at Huahine or in Marokko, depending on my budget 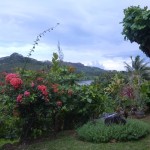 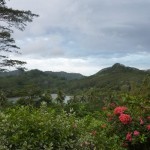 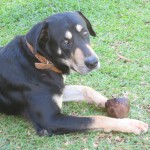 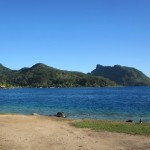 To get around more easy we decided to rent a scooter. Streets are much better than on Easter Island, so here it is no problem. First we drove to the supermarket to get some baguette and something for a picnic. When we finished shopping we saw a police woman telling the people something about “evacuer”. Well, we didn’t really get what was going on, so I asked the police woman in my best French (*smiley laughing out loud*) and she told us that there is a tsunami warning and we should drive with our scooter to a higher point (the supermarket is at sea level). Ok, we wanted to go to a lookout at the mountain anyway, so we did this first On the way we had a suspicious look at the water level (everything calm, no water disappearing, no water coming), and another scooter driver asked us on the way if we had heard of the warning (its all about speaking to people…*smiley winking*. We drove up the lookout, 200 or 300m above sea level. The more, the better, we thought (later we heard that 10-20m had been recommended)… The lookout was well visited and the atmosphere was like a family picnic, one woman gave bananas from her garden to everyone and there we were, waiting…. with a gorgeous view at least…. 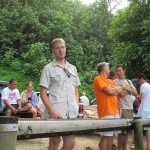 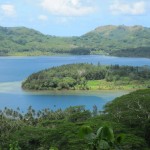 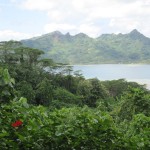 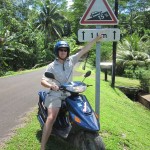 We stayed there for 3 hours, had a chat here and there, heard some radio to get some more information and waited…. until the alert “rouge” was offset.

After this, we looked at some ancient sites… 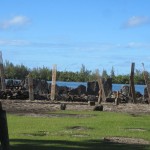 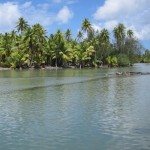 … and went to the beach (no worries, there was no tsunami, the wave was only about 40cm higher than the others). I went snorkelling there and the current was really strong, it took some effort to stay at one place, to navigate and NOT to get washed away and to end up in the fish traps… I can perfectly understand now, how they work 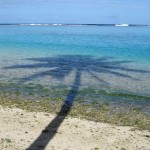 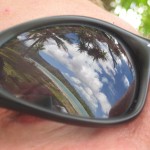 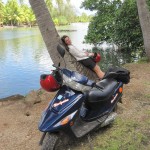 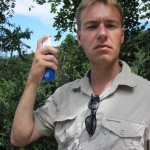 And yes, of course I had to visit a pearl farm. Poor Thorsten was a good boy and accompanied me. I learned a lot about the Tahiti cultured pearls and enjoyed it to have the opportunity to see it myself! 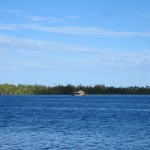 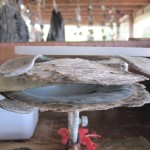 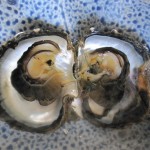 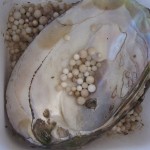 After the nucleus is injected, the shell is put in a little bag and then back in the lagoon (about 5 m depth). After 2 weeks, a scuba diver controls, if the nucleus had been “spit out” of the shell, if so, the shell will never accept a nucleus and therefore is not suitable for pearl production. Rejection rate is about 30%. If the shell keeps the nucleus, it will put layer after layer of the beautiful mother of pearl on it. It will stop the process naturally. After 18 months the pearl will be harvested and a new nucleus – exactly the size of the pearl will be injected. This can be done 3 or 4 times, however, the rejection rate goes up (the 4th time it is at 99%). That’s why the big pearls are so expensive, it’s not that they grow so long (also only 18 months).

With a very happy smile on my face we went on to the southern island of Huahine, passed a vanilla plantation (it smells like with the nose directly at a vanilla package), admired the blue and turquoise lagoon and enjoyed the French Polynesian beach for the last time…. 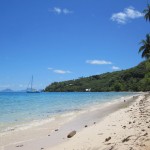 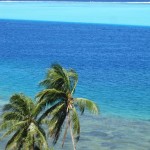 The flight back however (we took one with a stopover, to have one more landing and start to see the islands from above…*smiley winking* was extremely nice, we had a fabulous view on the neighbour / stopover island Raiatea and a last glimpse on Bora Bora… 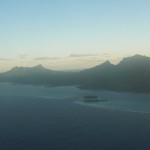 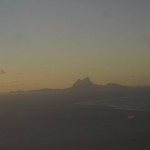 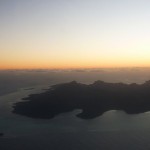 We were really soooo sad to leave… *smiley crying*